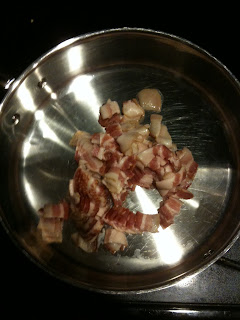 I love bacon and I love sweet potatoes, especially after a workout. I ate a predominantly meat free diet for over three years and during that time the smell of bacon would drive me wild. A fellow crossfitter gave me a wonderful recipe and while making it, I thought some of the key ingredients would make a great meal by themselves.  I love this recipe since it makes enough for me to eat for a few meals. For an added complexity you can add 1 tablespoon of maple syrup before baking. I give you Bacon Sweet Potato Sexytime!
Prep Time: 10 Minutes
Cook Time: 35-45 minutes
Serves: 3-5
Ingredients:
2 Large or three Medium Sweet Potatoes
1 Pkg Uncured Nitrite and Nitrate Free Bacon (approx. 1 lb.)
1 Onion
3 Cloves Garlic
½ Tsp each of Black Pepper, Kosher Salt, Smoked Paprika
1 Cup chopped Pecans
Prep: 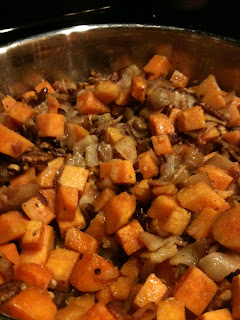 Preheat oven to 350 degrees. Peel and cube the sweet potatoes and place in microwave steamer bag. Dice onions and garlic and set aside. Slice bacon into ½” pieces and sauté in a large skillet. Once the bacon begins to render fat, about 3-4 minutes, add in the onions and garlic; stirring until mixed well with bacon and bacon fat. Continue to sauté for 4-5 minutes. During this time, steam the sweet potatoes in the microwave for 5 minutes. When the sweet potatoes are steamed, they should be soft enough to pierce with a fork but not mushy.  Add the sweet potatoes to the bacon mixture and stir until everything is even coated with bacon fat and mixed well. Add in the black pepper, salt and paprika and stir. Top with pecans and place the skillet in the oven for 25-30 minutes, stirring once during the baking period. If you do not have a skillet that is oven safe, you can transfer the mixture to a baking dish prior to adding the pecans.
To serve, simply spoon 1-1.5 cups per serving into a bowl.
Posted by Jason at 5:50 PM No comments:

I am literally kicking myself for not taking pictures of this recipe through the prep and cooking process. I guess I'll just have to make it again and post them up!

First. Not all meat is created equal. Understand this; it'll save you a lot of frustration and long term health problems in the long run. I recently started buying my meat from Fields of Athenry http://fieldsofathenryfarm.com/ A farm local to my area. They deliver and their meat is amazing! You can buy your meat from your local grocery store. You can even go so far as to buy the organic variety. What you need to understand is that a lot of organic meat, specifically beef, is still fed a diet that is not natural to them. Corn is not what cows naturally eat. Whenever possible, even if you buy meat from a grocer, buy organic grass fed beef and lamb. Buy free range chicken that is fed a natural diet. Not just organic. Pay attention to your meat! (Yeah yeah. Stop giggling...)

Without further ado, a nice little recipe for Lamb Shoulder.

Prep:
I leave all fat on the lamb shoulder as this helps to make the meat fall-off-the-bone awesome. You may have to slightly trim the lamb shoulder to get it to fit in your slow cooker. Feel free to do so, but DO NOT discard anything you trim off. Mix the dry spices in a small prep bowl and generously rub over the entire surface of the meat. (I know, giggle giggle.......) Set the meat aside.

Serving:
Once the lamb shoulder is done, using tongs, pull the meat from the slow cooker and place on a plate. You should be able to simply pull the bones out and discard or keep if you want to make soup. Trim off the fat and enjoy! I served mine with roasted Asparagus but you can pretty much serve however you like. Since my wife doesn't eat meat, I have plenty of this for lunches and breakfast throughout the week!
Posted by Jason at 9:36 AM No comments: 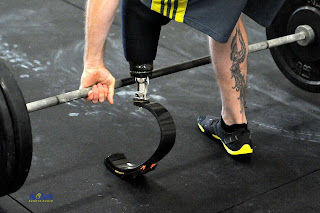 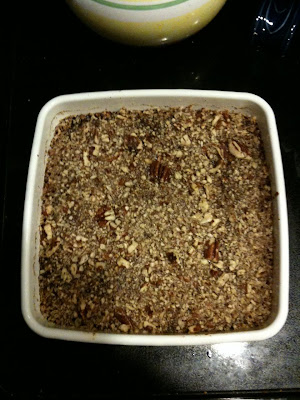 One of my favorite dishes for the holidays is the ultra awesome sweet potato casserole with the pecans and brown sugar on top. In my desire to create a paleo version, I came up with this simple recipe. Here's a couple tips. If you want a little more crunch on the top, double the amount of chopped pecans. You can also add a seasonal flare by substituting real natural maple syrup for the honey in the sweet potato mixture.
2 Lg Sweet potatoes
3/4 cup coconut milk
1 tsp vanilla extract
1 tbsp honey
2 eggs, beaten
topping:
1/2 cup chopped pecans
1/4 cup coconut oil
2 tbsp cinnamon
3 tbsp honey
Peel and cube sweet potatoes, steam in microwave steamer bag for 7 minutes or until tender. Mash in bowl. Add beaten eggs, coconut milk, vanilla extract and honey. Mix and place in baking dish.
Chop pecans and put aside. mix coconut oil, cinnamon and honey together. Microwave for 15 seconds to liquify. Pour on top of sweet potato mixture and spread.
Add chopped pecans evenly on top.
Place in oven on 325 and bake for 30 minutes or until nicely browned.
Posted by Jason at 7:26 PM No comments:

Risen from the Ashes 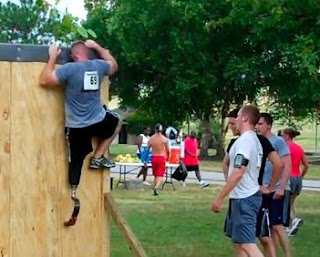