It Never Gets Easier, It Just Sucks Less!

Easily one of my favorite quotes around the CrossFit community. It truly sums up CrossFit in my eyes. If it gets easier, you're either doing it wrong or you need more weight!

Since becoming involved with CrossFit Walter Reed, I have heard the stories about crossfitting in the various gym spaces at both the old Walter Reed Army Medical Center as well as the combined Walter Reed National Military Medical Center. I experienced the same issues when I first began CrossFit at Golds Gym. Globo gyms and workout spaces simply are not geared towards this type of exercise!

With the space secured and ready, and the delivery of brand new equipment care of Rouge Fitness, Brian Wilson (Owner/Coach Patriot CrossFit and Potomac CrossFit), Matt Ramsey (Fellow amputee crossfitter from CrossFit Rubicon and 10th Mountain Division soldier) and I decided to bust out a quick inaugural WOD. With just the three of us, we broke a sweat and discussed the future of this project.

On 21 June, we had our official Grand Opening. On hand we had several Wounded Warriors from both the U.S. Army and the U.S.M.C. Everything from single amputees, dual amputees to upper body amputees and soldiers with mobility limiting injuries. We also had several fans of the project as well as Marines from the Marine Corp Detachment. The turn out was great. Strength work and a nice Metcon to open the box properly. I was able to witness just how scalable CrossFit is. From dual amputees doing dumbbell deadlifts from a bench to single leg amputees deadlifting from the store and learning to perform the push press.

We are already starting to expand classes. Class has been on Thursdays at 1430 but will expand to two classes a week (for now). Classes will be held on Tuesdays and Thursdays at 1400. These are open to Wounded Warriors and Military or Civilian Staff who bring these Wounded Warriors to class as a part of their PT session. If you are not a Wounded Warrior you can use the CrossFit Affiliate Finder to locate an affiliate near you.

For more information about CrossFit Walter Reed, see below:

On 9 June 2012, several of the Mid-Atlantic CrossFit affiliates came together in Washington D.C. to perform CrossFit for Hope. A fight gone bad type workout with all money raised going to St. Jude's Hospital for Cancer Research.


It was insane how many athletes came together for this event and the awesome buzz it generated. Bob Harper, trainer for NBC's The Biggest Loser and huge CrossFit fan came out and rubbed elbows with athletes, snapped pictures with athletes and his fans and participated in the event himself! As amazing as this was, my biggest sense of excitement came not from meeting a celebrity but from participating in such a great event with my son. 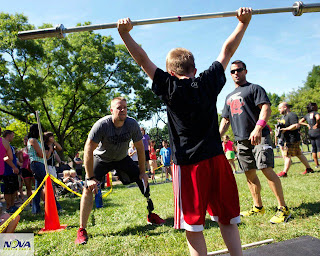 Sam was nervous about his first real WOD on a stage but I knew he would be awesome. As I finished my WOD, scoring 164 reps and raising over $500, I rushed and got Sam prepared. What an amazing performance. He stuck with it despite the obvious fatigue he was experiencing and scored an incredible 213 reps using the 15# bar, 20" box and jumping pull-ups. I couldn't have been prouder!

With the CrossFit for Hope WOD completed, I could finally turn my attention to an event I was a little apprehensive about. 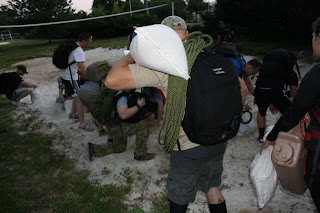 I had secretly waffled on whether or not to do a GORUCK Challenge. I checked out the site and knew a little about what I thought was going to be in store for me. As luck would have it, a couple of my CrossFit friends were doing the June 15th GRC in Washington D.C. Waffling was abandoned and I signed up. A nighttime ruckmarch through the streets of D.C., sure, who would think that was fun!?

With a borrowed GORUCK GR1 (Thanks Frank) and my six wrapped bricks, I was all set. Having not trained, I was a little concerned but I don't quit on things so I figured I would go out there and do all I could do to make the event and fun as I could. This was an exhausting event. Mentally draining. At times, grueling (barefoot microderm abrasion care of David and the means D.C. streets). But I found that I loved every minute of it. Seriously. Cramped legs and all. My only regret was not properly hydrating; although I thought I was hydrated. After being broken up into our classes, we were assigned the class number 187. Hell yes. The murder class! With a class number like 187, we were bound the be the baddest of the bad......or so we thought. We were instantly dubbed the Short Bus crew. Rucktards (A play on words from my favorite Army term of endearment; Fuck-tard). One rule of GORUCK, at least it seems to be an unwritten rule, is that you do not talk too much about what exactly you do during a Challenge or GORUCK event. That just takes the fun out of it! (For any of you looking to gain insight into what a GRC is all about, you're not going to get it here) What I can tell you is that it's 95% mental, 5% physical and 25% ACRT (rucktard math). I loved it so much I have signed up for my next event, the GORUCK D.C. Scavenger in October, and plan to shadow the July 4th GRC in D.C. 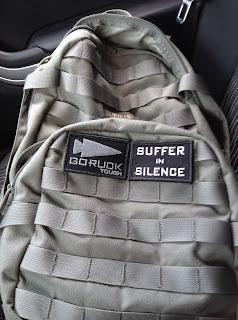 Now considered a Short Bus GRT Rucktard, I proudly wear my GORUCK Tough and Suffer In Silence patches. I have found that, not unlike the CrossFit community, GORUCK Tough individuals are a part of a sort of deranged extended family. A family that suffers together, parties together and helps each other out. As with CrossFit for Hope, I have seen the desire to put your physical limitations aside in order to support a cause much higher than you as an individual. This is evident in the multiple Mini-GRCs taking place in Washington D.C. and Philadelphia in order to raise money for fellow GRT Jason Alexander's daughter who is going through Bone Marrow Transplant Treatment. The support and outreach through attendees of these events and the purchase of Kick Ass Katie patches is truly incredible!

I am so unbelievably proud to be a part of two wonderfully dysfunctional families.
Posted by Jason at 9:40 AM No comments:

I always get excited when I see deadlifts on the schedule for a WOD. It's something I am pretty good at and is a real confidence booster. I may not be able to hang with other athletes with squats and compound olympic lifts, but I can pick shit up and put it down. Simple as that. I've been chasing an elusive number for 7-8 months now though. In October 2011, I was able to pull a solid 395 deadlift however failed at 405. I just figured I wasn't ready to lift that quite yet. Several other times over the last 8 months, I have failed at 385 and 395. This did little for my confidence.

On Friday, 1 June 2012, CrossFit Reston's WOD was a 1 RM Deadlift. I was determined to break that 400 lb barrier. Thursday, I did a little light weight deadlifting with Coach Brian Wilson at CrossFit Walter Reed; focusing on position, hand placement and driving my feet through the floor. Friday arrived and I was ready.

As suggested by Coach Gretchen Kittelberger, I started low and did limited warm up sets. As I climbed in weight, I felt good but then disaster struck. I failed, AGAIN on 385! WTF? How? No way was I going to let this happen again. I took another breath, set my feet and hands, mentally set myself, gripped and pulled the weight up. The second attempt was successful but had I used up that little bit..........NOPE! With just a minute or two left, we loaded up the final set with 405. Stepped forward, gripped it, took a breath and pulled.

I finally broke the barrier! That elusive barrier I had been chasing. Now to keep going. Now let's be honest, due to bio-mechanical limitations, there was a small amount of back rounding and a small amount of shoulder rounding despite starting with my shoulder blades back. I'll over come this but with over 400 lbs suspended from my arms, I am sure this a little normal.